Columbia University attorney Alexis J. Hoag discusses the history of how we got to this point and the ways that researchers can help reduce bias against black Americans throughout the legal system 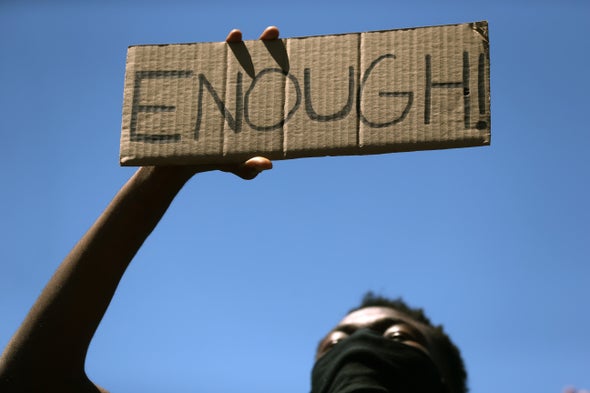 In a now-infamous event captured on video, on May 25 George Floyd, a 46-year-old black man, was killed by a Minneapolis police officer outside of a corner store. Officer Derek Chauvin kneeled on Floyd’s neck for eight minutes and 46 seconds while two other officers helped to hold him down and a third stood guard nearby. All four officers have been fired; Chauvin has been charged with second-degree murder and second-degree manslaughter, and the other three officers have been charged with aiding and abetting murder.

The 2014 shooting death of unarmed black teenager Michael Brown in Ferguson, Mo., sparked a renewed emphasis on racism and police brutality in the U.S.’s political and cultural conversation. In the past few years many names have been added to the list of black people killed by police. Despite some efforts to acknowledge and grapple with systemic racism in American institutions, anger and distrust between law enforcement and black Americans have remained high. But Floyd’s death sparked a new level of outrage. Protests have erupted in hundreds of cities around the U.S. Most demonstrations have been peaceful. But some have turned violent, with police using force against protesters, and a small percentage of people setting fire to police cars, looting stores, and defacing or damaging buildings.

Civil rights attorney Alexis J. Hoag is the inaugural practitioner in residence at the Eric H. Holder, Jr., Initiative for Civil and Political Rights at Columbia University. She works with both undergraduates and law school students at Columbia to introduce them to civil rights field work (which she describes as “real issues, real clients, real cases”). Hoag was previously a senior counsel at the NAACP Legal Defense and Educational Fund. Scientific American asked her to share her perspective on the history that has brought the U.S. to the breaking point—and her ideas for how to make substantive improvements in how law enforcement and courts treat black Americans in the country.

Why are we seeing this level of protest now?

I think it’s a combination of things. COVID-19 [has had a] disproportionate impact on black people because of long-standing structural inequalities. Black people are more likely to live in hypersegregated low-income areas that are under-resourced. And black people are more prone to the very preexisting conditions that make people vulnerable to COVID-19 because of structural inequality and lack of access to health care. We’ve all been cooped up for 10 to 11 weeks. Forty million people [in the U.S.] are unemployed. And there was something egregious about the video that circulated of George Floyd being executed for the suspicion of tendering a counterfeit $20 bill. And I want to stress “suspicion,” because we still don’t know. That became a death sentence for him.

The violence that has been rendered against black bodies has gone on for centuries. Now it’s out there for everyone to see. And the response, which is hopeful and heartening to me, is that people—not just black Americans—in this country are really disturbed and appropriately so.

What are the important historical factors that have led up to this point?

I lean so heavily on the unique history of this country and the fact that we enslaved people, black people. To hold people in bondage as property, you had to look at them as less than human. You see that continuing to happen today in [what] I refer to as the criminal legal system, not the justice system, because it is not just. We are not there yet. As an appellate attorney, I read a lot of transcripts of trials. And the level of dehumanization that prosecutors use to refer to black criminal defendants is striking. It’s the verbiage used, that the defendant was “circling” and “hunting” the victim. What hunts and circles? Animals. When you can dehumanize an individual, of course, you can put them away for a long time, you can sentence them to death. And of course, you can put your knee on somebody’s neck for nine minutes, because you see them as less than human. It’s a combination of the dehumanization of black people with the presumption of dangerousness and criminality.

Is racism getting worse? Or has the ubiquity of cell phones and video recordings simply made us more aware of it?

These issues are getting amplified; they’re getting recorded. I think back to the early 1990s and Rodney King’s videotaped beating—that really galvanized people around this issue—an issue that many black Americans were intimately aware of already—and put it out there for the world to see. Then the response after those officers were acquitted was public demonstrations in 1992 in Los Angeles. I think people would not have been as engaged if we didn’t have that image. Now we walk around with [cameras] in our pockets.

How does the apparent increase in white nationalism fit in?

I don’t know that I would call it an increase. White nationalists, known earlier as white supremacists, first rallied [more than] 150 years ago to violently limit the freedom of newly emancipated black Americans. Despite federal legislation extending the benefits of citizenship to black people, white supremacists passed state laws codifying inequality and used violence and intimidation to curtail any black exercise of freedom. What is happening now is that we have [a presidential] administration that welcomes and encourages white nationalist views and activities.

Have events in Ferguson and other cities, and the Black Lives Matter movement as a whole, had any effect on policing?

Ferguson was a massive wake-up call. There was a brief glimmer of hope. There was a mechanism in place: the Law Enforcement Misconduct [Statute]. It [is] a federal law the Department of Justice could rely on to investigate Ferguson, to investigate police misconduct in Baltimore [where Freddie Gray, a 25-year-old black man, died while being transported in a police vehicle in what was ruled to be a homicide]. Right now that law is being grossly underutilized by Attorney General William Barr. Who the administration is, and who the chief law enforcement officer of this country is—the attorney general of the U.S.—makes a difference. We’ve seen a massive rollback in the responsiveness of the [Trump] administration—[in taking] a hard look at injustice and at rampant police misconduct.

The other step back that the country has taken is to characterize officers involved in misconduct as “a few bad apples.” I think we all need to admit that it’s not a few bad apples; it’s a rotten apple tree. The history of policing in the South [was driven in part by] slave patrols that were monitoring the movement of black bodies. And in the North, law enforcement was privately funded [and often involved protecting property and goods]. The police got started targeting poor people and black people.

I think there needs to be a really hard conversation nationally and within law enforcement. To use force, police officers have to reasonably believe that their lives are in danger. What is it about black skin that makes law enforcement feel threatened for their lives? In addition, there are legal mechanisms that need to be examined. “Qualified immunity” as a defense to police misconduct was judicially created in 1982. It shields government officials from being sued for discretionary actions that are performed within their official capacities unless the action violates clearly established federal law. Somebody who is suing an officer for tasing someone while they’re handcuffed has to find a case from the U.S. Supreme Court or the highest court of appeals in their jurisdiction that says that exact act—being handcuffed and tased—is unconstitutional. This is a massive hurdle for a plaintiff.

What are social scientists and researchers doing to help?

Data are currency. We can create a national database of officer misconduct. You have officers such as Derek Chauvin, who had 17 complaints against him and [was] still allowed to operate within the [Minneapolis Police] Department.

The data collection that happens within police departments enabled experts in the stop-and-frisk litigation [against] the [New York City Police Department] to shine a spotlight on gross disparities: the rate of stops and searches of black and brown men and boys [coupled with] the low rate of actually acquiring contraband. They found that the rate of securing contraband from white individuals who had been stopped and frisked was so much higher because the police were actually using discretion.

There’s powerful data collection that happens in our criminal courts. There have been studies showing that, all factors being equal, judges are rendering longer and harsher sentences for black defendants. These judges are setting higher bail. You can isolate all these other factors, but race is the difference. That’s very powerful—to be able to document and publish those findings.

There has also been some really good social science research on implicit bias and the way that it operates. We could all take [implicit association tests] on our computers. You could do a training with your employees. To start with, there is this recognition, this acknowledgement that we all have implicit bias.

And how do we use that information and not just let people off the hook?

Let’s talk about it. Social science research shows that when there’s recognition that we harbor implicit bias, that awareness can help mitigate [such] bias impacting our daily interactions and decisions.

What about people’s decision to protest during the pandemic? Are you worried that protesters will get sick and spread COVID-19?

Of course. I worry that there will be a second wave of infections. But I think that also speaks to how pressing the issue is and how strongly people feel about it—that they are risking their lives to bring attention to the rampant and lethal mistreatment of black and brown bodies at the hands of law enforcement.